Does God exist or not

Does God exist or is it that God does not exist (Allah, Jehovah).

The question “Does god exist” first of all I myself answer with: Yes basically God does exist. God or Allah exists and it is the centerpiece of this universe. But the pictures we make of God are very wrong. And it is just in these wrong thought images about what goed is that raise the question: does God exist. Because images of God that seem completely childish and unrealistic make people think that God does not exist. So to get the complete picture I think we should first look at how we define God usually. Lets look at what images we make up to describe God. So some say God is a person others try to understand God is an energy field or similar thing. But the point is actually with every way you try to define Allah or make an image of Allah you must come to a wrong image because Allah is something that can not be described with the capabilies of making images that we have. That is to say since Ishvara or Allah is more then we can understand each image that you make can only be created out of the things that we know. And Allah is different to what we know. So no image or Idea that we make to describe God will ever be a true description of God. So for the question does God exist think we should understand where our difficulties in seeing this thing come form in the first place. I have tried to make a drawing to give an impression of why it is difficult to picture God. But as I always say and actually just said again in the previous sentences: pictures are not the real thing. The higher things become understandable more and more the more you progress and they do not at all look like the pictures or images you make of them. To understand the higher things you yourself need to have higher capabilities of understanding. And with reaching higher, with becoming cosmically more, with developing you become more and more able to understand things in a completely different way. You reach a higher form of understanding as a part of your development. So God can me understood better but you have to grow so you will understand Ishvara better later when you have developed to a different understanding. So don’t take drawings to serious of course. Images can help us to find the right way more easy but they are never a true description of higher things. But now lets see the images I made. 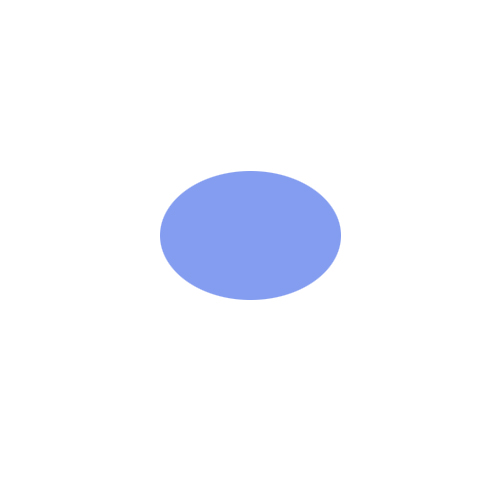 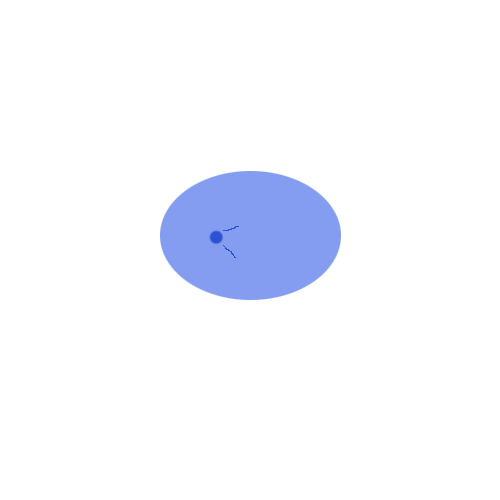 This darker blue dot in the middle is supposed to be you. Or any other person in the universe. The lines are not the arms of this person, this is to show that the person looks into the universe and sees things. So you can see that the person does not see the complete universe but rather sees just a small part of the universe. This what the person sees is “the world of this person”, its circumstances. The person sees a part of the world whereas some planets are so far away that you have never seen them or maybe you have not been to New York or Hawaii so you know the town where you live and so you have a view in this world that does not see the complete universe. So this image shows a person in the universe with a limited knowledge. 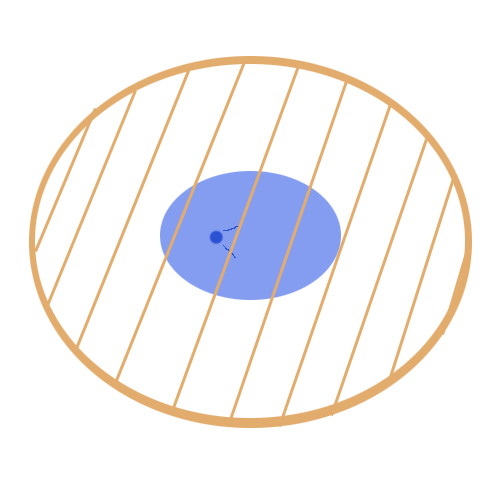 So if you for example say God is a person then this must be wrong. If you ask what sex God has, if he is a man or a woman then this is also a useless question. And if you try to find a better image for God and say I picture God as an energy field then this is also wrong. Because whatever image you derive from the things you know they never give you an idea of what God or the higher things are like. The yellow lines look like an energy field that goes through the universe, but that is not meant. As I said the blue universe in the image is a part of the yellow universe and the blue universe does not exist by itself, it exists only as a part of the yellow universe. So the yellow lines do not go through the blue universe, they are more the lines of connection below which the yellow universe that we do not see becomes visible to us in form of the blue universe that we can really see. And all the yellow parts are of a higher level of understanding. So they are of a completely different nature then everything we know. So God does exist. But it is not possible to describe God. That means also that the God that we usually picture does not exist. God or Ishvara does not exist in any form that we can imagine yet. The higher things are of a different nature than the things that we see and usually call the universe.

So you often here that sentence: “God is love”. The complete universe, the blue and the yellow form make our existence. And in this complete universe we have eternal life. Our basic existence is saved. So we are saved inside of this complete universe. So we say “God saves us”. And with this we found a quite useful image for God because with this image we do not describe God but rather the effect of God that it has on us. So: to say that God will save your life is not a stupid idea that derives from the wish that something saves your life. To say that God is love and saves your life is only the efford to find a good description of this system that I tried to paint there. So any description of God or Ishvara that we make out of the things that we can see must fail because the higher things are always different then our description. And you also the description that god is love is not an accurate description of God, But the descriptions “Allah is love” or “Allah saves you” is still useful for giving us a better understanding of Allah.

What if I don’t want to come to God or can’t believe?