I have programmed the Augmented Reality Arcade Game Phalanx VR which you can download for free Let me advertise it.

Phalanx Vr is a great “virtual reality” game for cardboard. Even better it is actually an “augmented reality” game(Ar). Get this great android game for free on the google play store. Could be one of the best Ar games at the moment.

Fun for your google cardboard 2.0 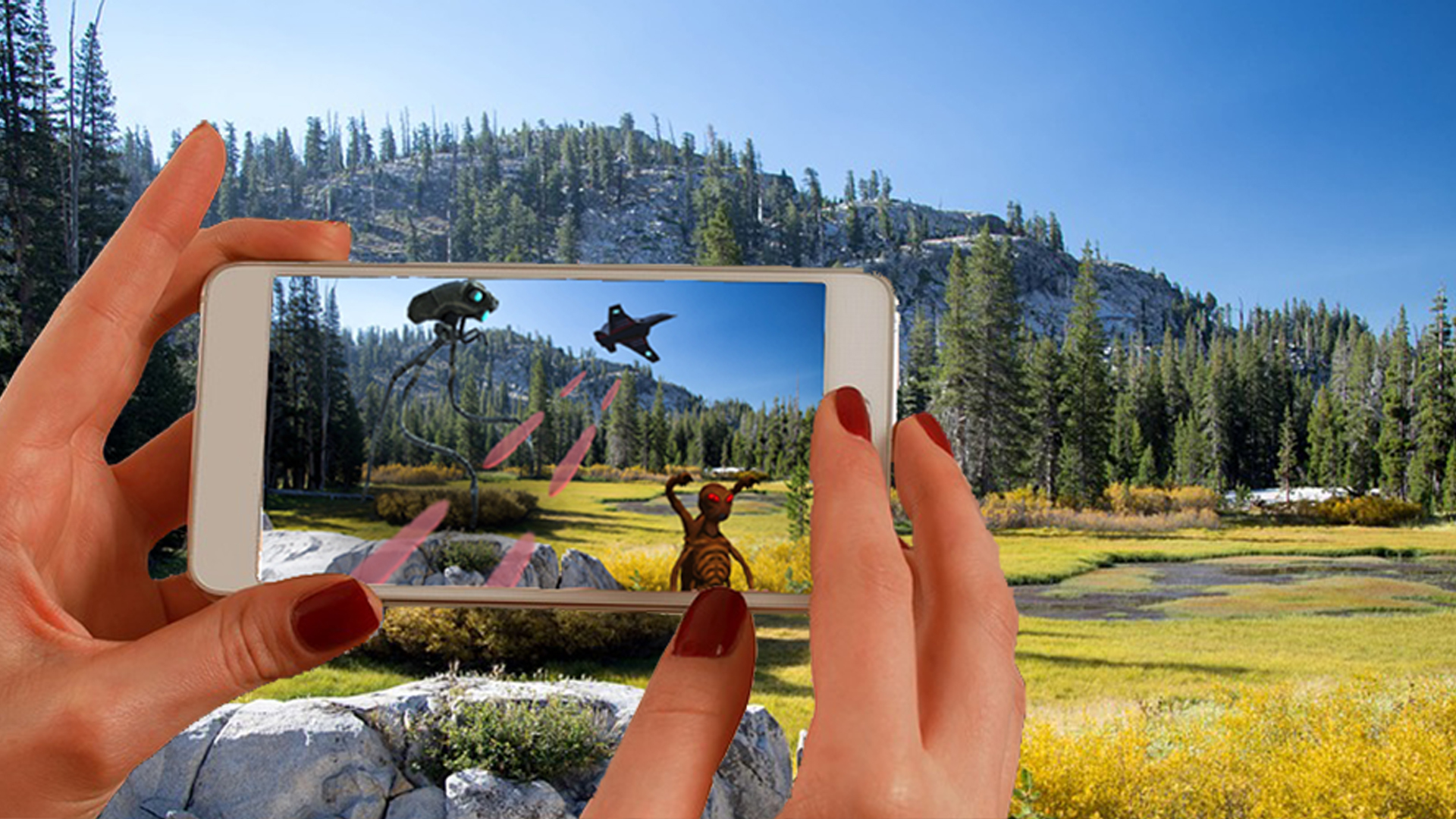 Download this game for free. See the link on top of the page

Lets assume your phone is good enough. Then you are just one click away from a nice little game. Follow the link above. If we now assume you are also one of the geeks who already have bought a google cardboard 2.0 device then you are in for a really nice augmented reality experience. Phalanx VR is a game in which you see alien ships and alien tripods all around you and shoot them with your laser turret. Fire all you got in this arcade styled shooter game. 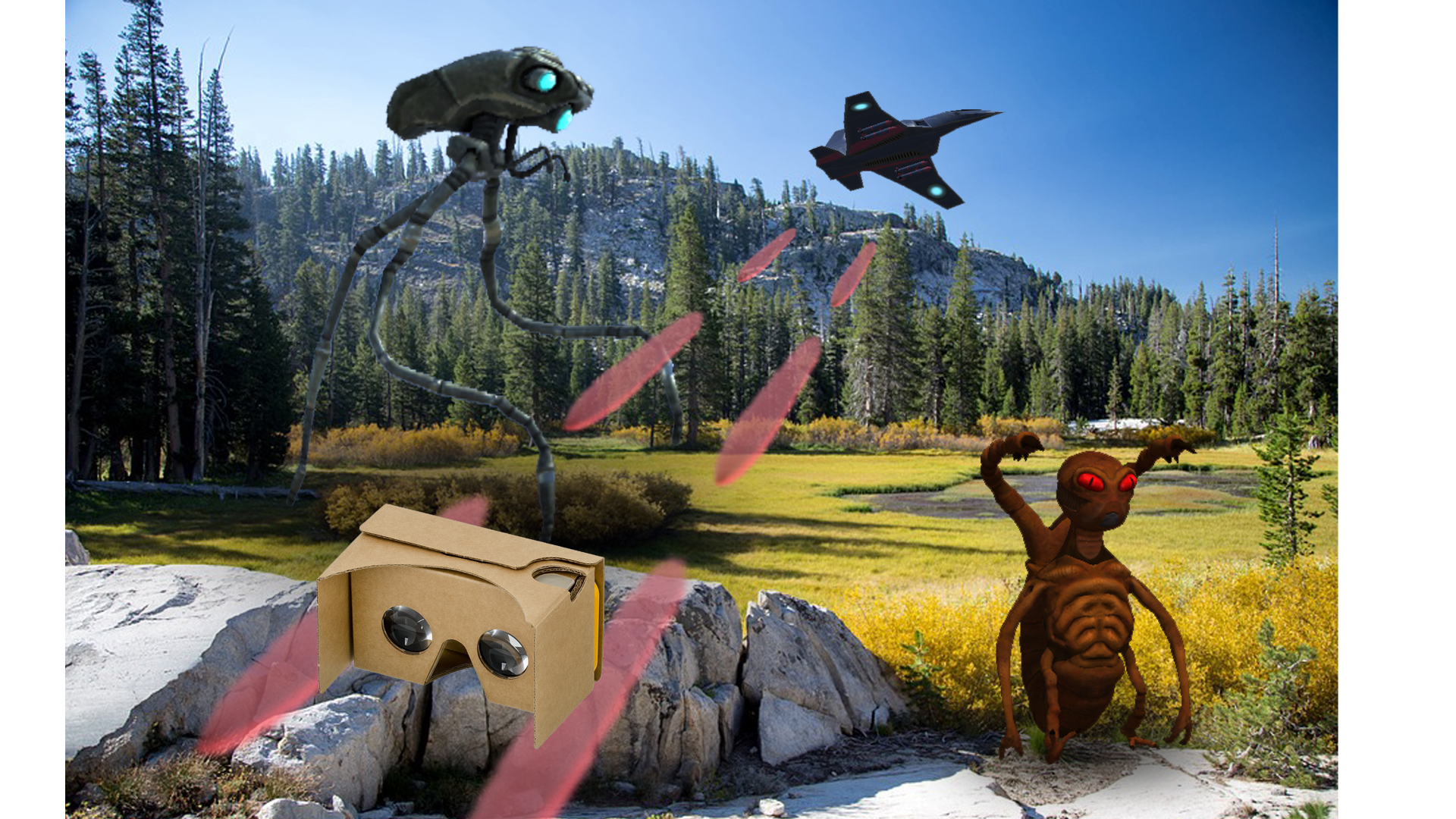 It is a nice experience to see the alien forces around you. That is of course if you like shooter games in which you fight invaders from outer space with a big laser turret. In this app you are sitting inside a big laser anti air gun and shoot planes that appear in the sky.

About fourty years ago there was a video game called Space Invaders.You see it in one of the images. It was a huge success and still is one of the great classic names in computer game history. In this arcade game you shoot at alien that you see on your computer screen. The aliens featured in this game are today classic forms for little gimmics (I am talking about maybe stuffies or key chains). But now 40 years have passed and new technology came up. Virtual Reality is the word here. And that means today you do not have to shoot at some alien starships on your computer screen. Today the aliens can be all around you. The alien starships are really in the sky above you. All you basicly need for this is a powerful smartphone (lets say Android 4.0 phone) and Google cardboard glasses. 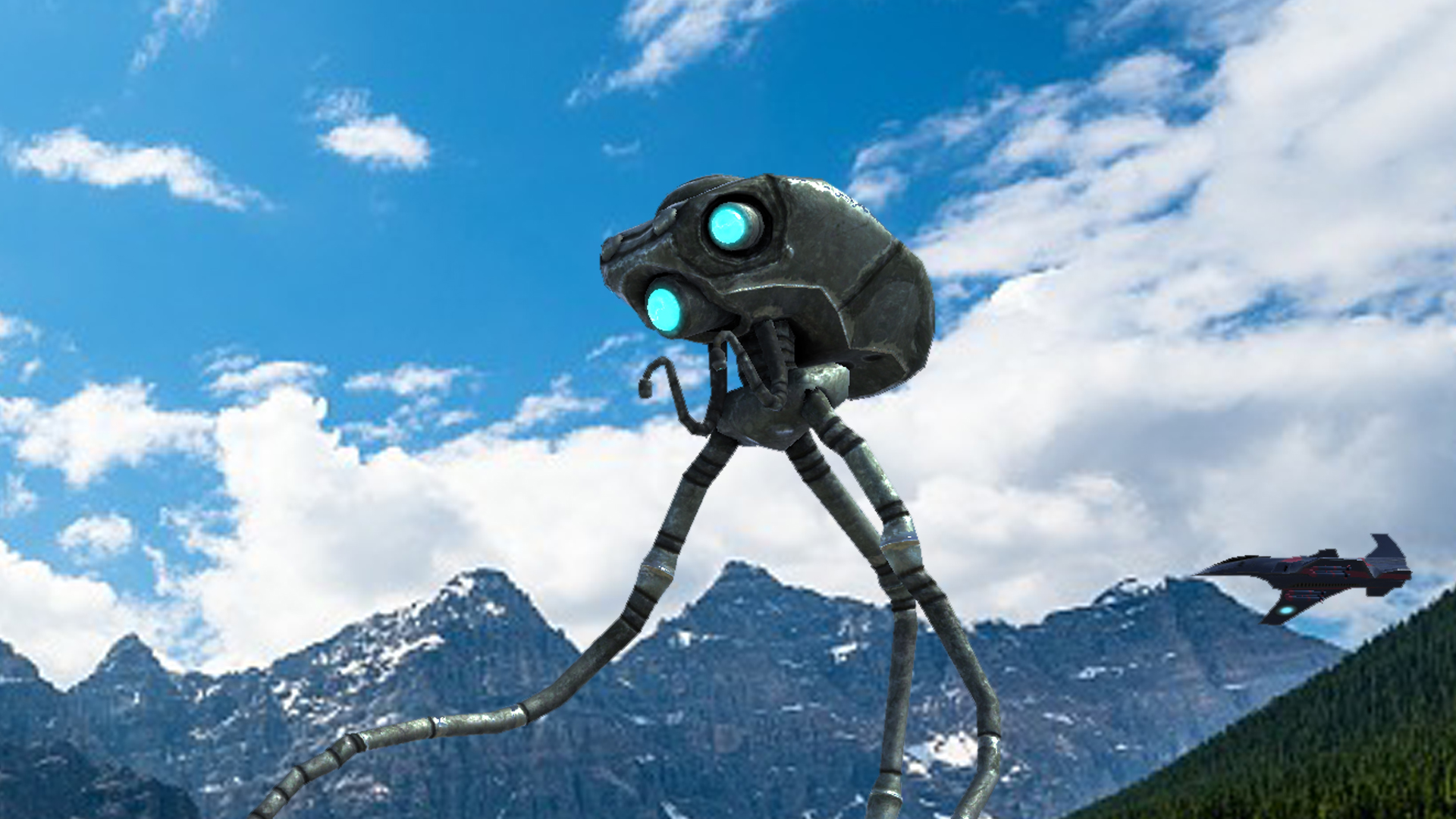 Augmented Reality game means that you see your usual environment but the computer puts graphics or information into your field of view. So the reality you see becomes altered. The first thing you think of is of course something that gives you useful information about the things around you. For example you see somebody and your display gives you the information that it is this persons birthday. Or you see prices displayed beneath the fruit you are holding in a supermarket. But then of course there is also the idea to use it as a possibilitie for games. And now you can see a glimpse of this future of games that happen all around you with the game Phalanx VR. Follow the link above.

Phalanx Vr is a nice sci fi shooter space game. Download it for free. See the invasion forces right in front of you. Enjoy shooting some spacecraft that are invading our home planet. Get this nice app for your google cardboard device and start the “War of the Worlds” experience. If you are into lasers and action and especially into alien stuff then you might like this new free game. Be sure to stand tough as a line of defense against these visitors from outer space. Warm up your laser cannon.

In the early nineties I saw a documentary about future science. It was showing a virtual reality device. And with this somebody played an ego shooter game. When I saw this as a kid I was very fascinated and wanted to have this technology to play with. And actually I was waiting all the time for this stuff to become available. And now we really have this kind technology at an affordable price. So today I am proud to present one of the first games with an explicitly cool virtual reality experience. I feel a bit like experiencing a period of “founder spirit”. As if I was witnessing a new chapter in computer games just as Space Invader was one. Now suddenly the things are not only on a screen anymore but all around you. And I can not only play it, but even program it. I really like it. As I said: I never regretted buying my seven dollars cardboard 2.0 device. If you want to see the game that I programmed and that I am talking about here go to the top of this article. I hope you can download it to your phone. Have fun.

What is an Augmented Reality game

You can also play this cool game without Vr goggles in a non Vr mode. 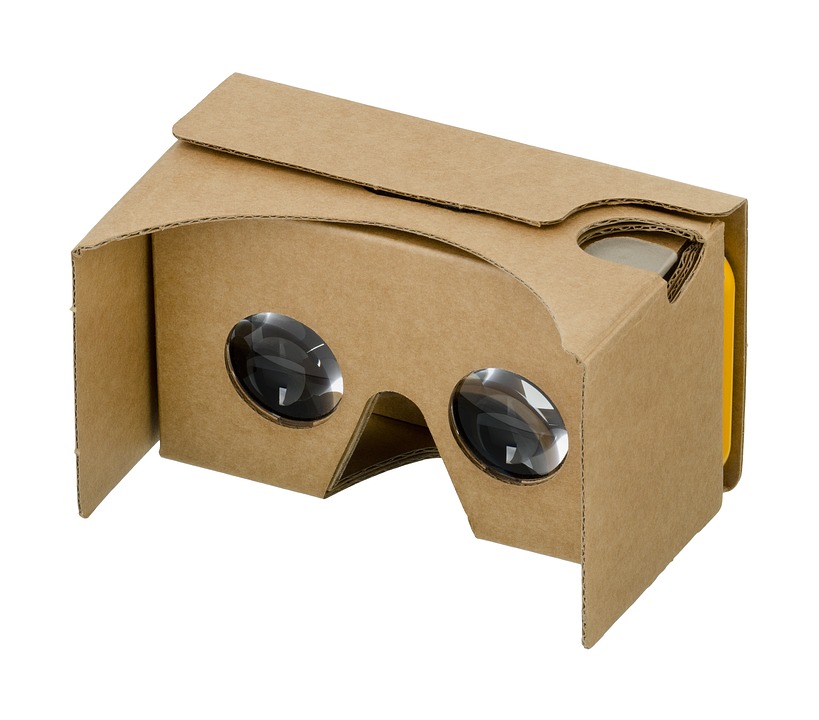 This is the device you need for fully playing this free augmented reality game. The google Cardboard 2.0 costs about 7 dollars. V 2.0 has the induction button other then the magnetic button. you can fake this on other vr glasses with a “tinfoil button for cardboard” Google this it shows you a way how to run this game on your vr device if you don’t have exactly google cardboar 2.0 by adding this button to your device yourself. it is not to complicated. follow a few links.

Augmented Reality means that you go out of your house and then you see the aliens live and right in front of you. That is very special. It puts the aliens and jets right into your world. You need a device called Google Cardboard 2.0. This device costs about 7 dollars. But with this thing then you actually really see the planes in the sky above you. And you see giant alien tripods towering above you right outside your house. It is actually very nice. And yet the game is very arcade. So follow the link above and install my latest game for free.

If you don’t have a Cardboard 2.0 device you can not see the aliens really around you. This virtual reality device was produced to be a cheap way of doing what pricey virtual reality goggles do (pricey = 700 $!). And if you see that you at least see some virtual reality for 7 dollars you will understand why I never regretted buying one of those for me.

So you Like dinosaurs. And you have a google cardbord. Then get ready for a little augmented reality dinosaur game. Augmented reality means that the real world is filled with objects from the computer world. And I did that with dinosaurs. Above you could see this with aliens but I thought more games are better. And so I programmed four games. All of them are augmented reality apps. And actually all are arcade games for google cardboard. So keep your finger on the trigger. In the Dinosaur game you will not kill dinosaurs. I like these animals and ultimatly they only prey because it is their instinct. And anyways the image of the dinosaur has changed over the years from a carnivorous monster to an animal that has to be petted and cared for. So I decided that in this game the prehistoric animals are going to be just stunned with a stun gun, Nevertheless you keep your gun and shoot away. You will see the creatures surround you. We all heard of the description in Jurassic Park when that guy tells about a raptor attack. How these animals will be so clever that they surround you. And with my vr app you will have the pleasure to get close to that experience. If you have google cardboard 3d virtual reality goggles the raptors will indeed circle around you all the time ready for their assault. And you have to look around and try to shoot them ass they want to make you their prey.

And then comes the big one. The king of df dinosaurs. The T-Rex. Actually it is an llosaurus that I just make to big. Lol.

What is “arcade”. Meaning in computer games 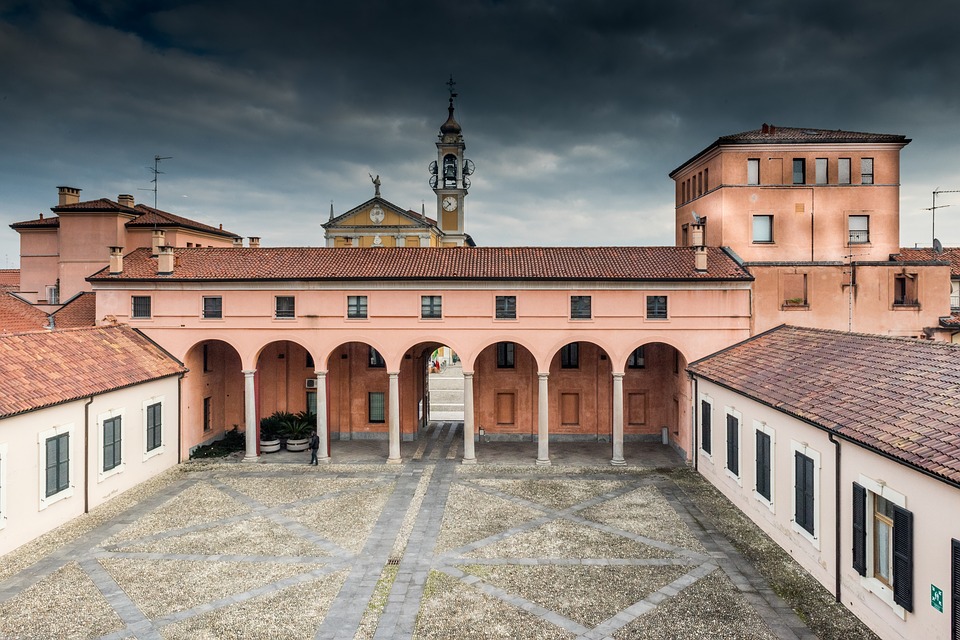 “Arcade” originally a term from house-building. “Arcs” that span over collumns in a row.

“An arcade” is actually a term from architecture. It describes such a thing as you see in the image. Arches that span from pillar to pilllar. 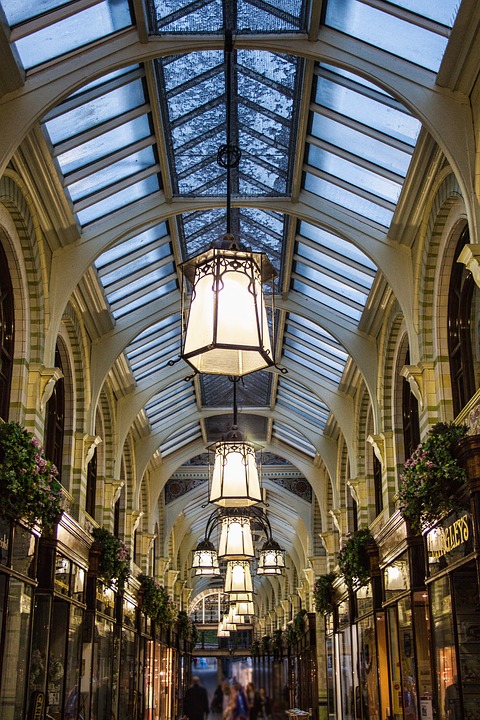 Later the term arcade became used for describing shopping malls because they sometimes had this architecture. 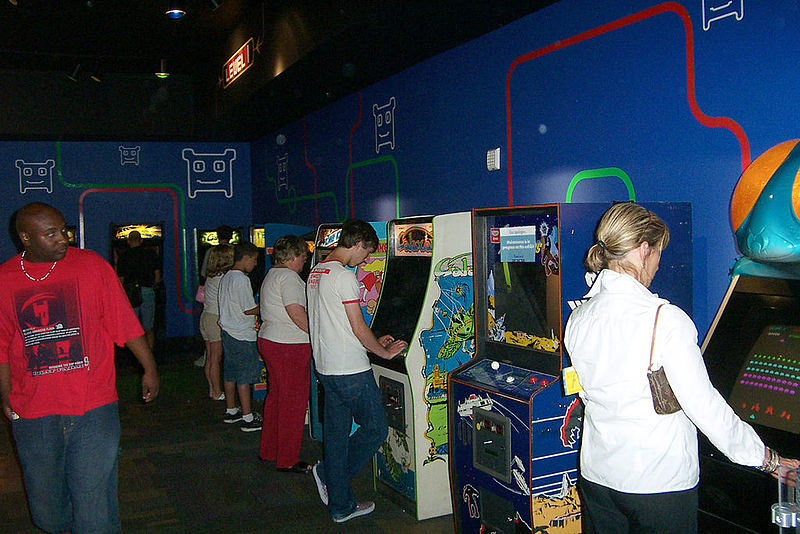 “Arcade” a place where computer games are in which you put coins to play. Image by: George Hotelling.

And also the term arcade became used for this: A room where you can play videogames. At the right you can now see the very classic game “Space Invaders”. Phalanx VR: Space is a bit like Space Invaders but with more modern techology.

And from the name of these play rooms where these arcade machines were set up derives the term “arcade” to describe a certain feel of specific computer games. So you can say: A certain game is very “arcade”. When people thought of arcade games they saw the players rapidly pressing the fire button and yanking the joystick in just a few different directions yet having a lot of fun with the game. And so today when you say a game is very “arcade” you mean stuff like: “You do not have an ammunition limit and can just keep on shooting.” or “It is not a realistic simulation but rather a computer game: Jump, duck, shoot.” or “You have enough health to take some hits. That is not your problem. Your problem is to hold that trigger.” These sentences are meant when somebody says: A game is very arcade.