Some personal stuff about me

My name is Stephan. Or my computername is “evader”. Thats why this page is called “evader Spirituality” I hope you like hanging around on this site and read the articles. 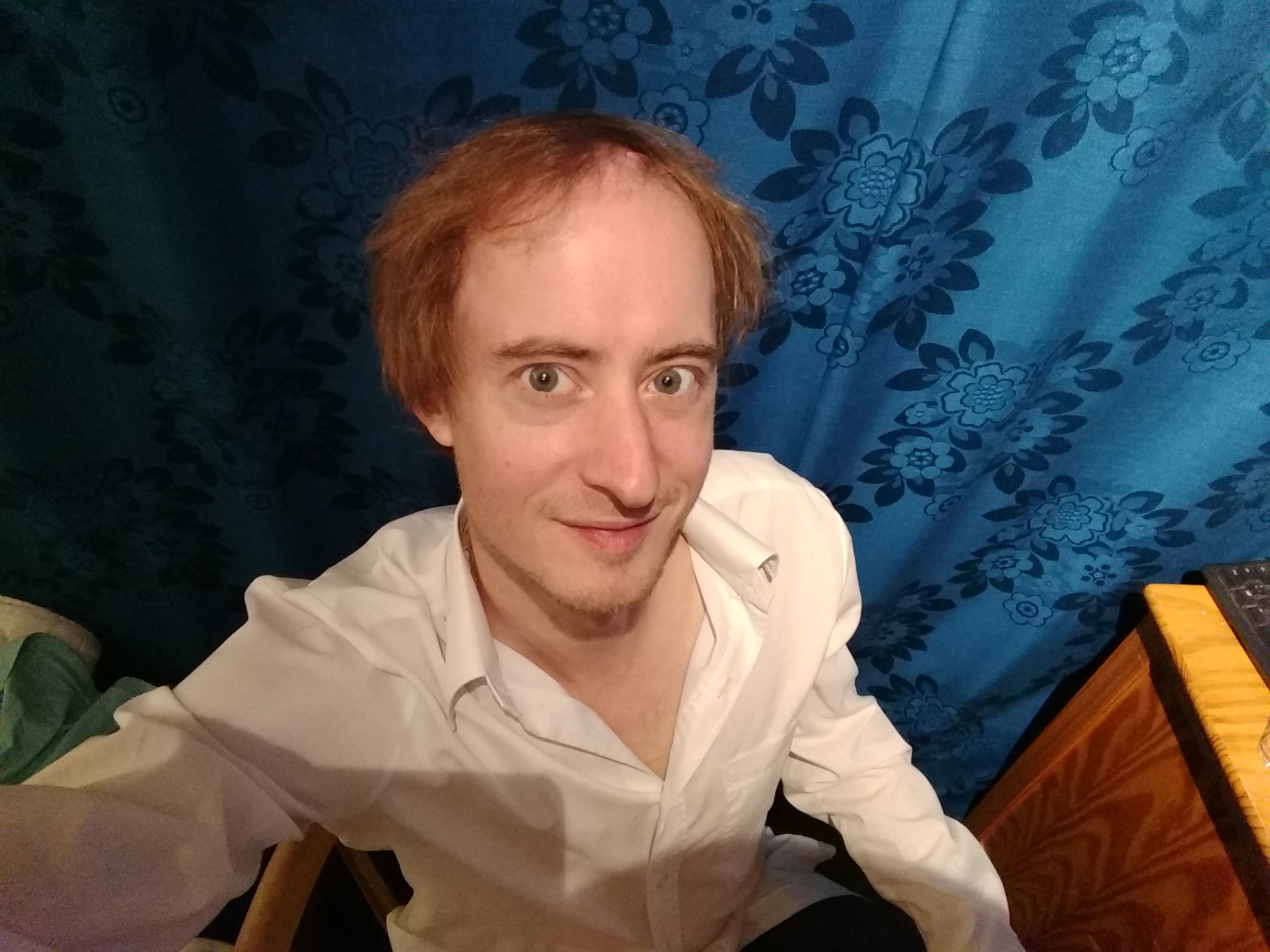 I am male. I am heterosexual, so I like women but of course I am not against homosexuals. In my free time I like to watch movies, dance around, sing, hang out with friends, play guitar, write scripts for things I want to film, play computergames with friends, meditate, make computergraphics sometimes, do some Kung Fu, make computermusic sometimes make computergames and I paint and draw(But I have no time for painting at the moment). As a profession I`m on the way to working in the film- or theater-business somewhere. My political attitude is rather left winged.

From here I tell you my favourite things and why I like them.

What are my favourite movies and things on TV.

The Matrix 1(only in english language)

Matrix has a great story. It is one of mankinds overall classic stories: One is the chosen one and has to understand that he has the superhuman potential to help and then saves mankind. And this told in an unbelievably lyrical way where images and the way too speak make the hole movie to be a modern filmic poem. This movie is one of my big favourites. But as I said the german version(german dubbed) is a catastrophy this movie is only good in english. Also not the trilogie only the first Matrix movie. And it is an action movie so maybe not so fun for everyone but as an action movie it is really one of the absolute best.

(with Picard and Kirk Tng and Tos). I very much like SciFi. I think it is a very playful genre of a certain lightness and fun in which there is a good athmosphere to think about human issues. Star Wars by the way is again the same story as I just said about Matrix: One is the chosen one and has to understand that he has the superhuman potential to help and then saves mankind. Original Star Trek the serial, that is the serial with Kirk and Spock, I like very much because it is the only show that I know in which the background uses the colours very pure. Often the background is just one colour. This I think is very film-lyric like because it uses the direct effect of the color and the image that arises from this treatment. Also I think the acting is very good because it has a very modern way of portraing strong lively persons by recurring to the actors own understanding of the way to behave and to hold their bodies.

I like Pulp Fiction which is in story and film-techniqe a masterpeace for me.

Which is a great movie. I especially like the way the script is. I don’t know the english expression but in Germany we say to something like this that it is “round” or a “round thing” because the scripts really contains only the information needed for the story. It is complete and nothing is to much and it is all well sorted. I think this script is a masterpiece of story. The second and third Back to the Future parts are also very good.

Lets say first 8- 10 seasons. Funniest thing that is on tv. Well there is other very funny stuff but Simpsons has this continuity in being funny and also jokes of such a depth concerning our society. If you should not know the Simpsons then go to the internet and watch it starting from season 1.

That is a movie from the 90s but it plays in the seventies and looks like a seventies movie a bit. The great thing is: There is a special way in the script to be episodic and rather sorted by the movies overall theme “growing up” instead of the usual developing story. So this movie is very fun to see and also very interesting from a movie-theoretical view. You know there is many of these school movies which we all know which are like Dazed and Confused. They are called “coming of age” movies. That means “getting an adult”. Great movie.

This is so great.

I also like some sitcoms like Big Bang theory, How I Met your Mother, Friends, Seinfeld, Married with Children. South Park and movies like Lethal weapon, Die Hard 1 and 2 and 3 is also OK, Alien 2, Indiana jones 3. Batman movies, Spiderman movies, The first and second X Men. I usually like these Marvel comic movies for after my film studies I now know that they are not stupid and flat but rather a different type of working with the art form movie that has less story and more effects on the movement and feeling of the viewer. Terminator 1, 2 and 4 and a lot more. I think you get a general impression of what type of movies I like.

Million dollar baby, Twelve monkeys, Sixth sense or as I say Sick sense, Pearl harbour. Seven. Every tv show with fishing(because it is watching how animals are killed). Don’t watch these movies now just to see why they are bad, spare yourself.

Food: Ricenoodles with seasoning(from asian restaurant, can have tofu). Spaghetti minced meat-tomato if possible champignons which can be out of a tin can. Rice with sauce of tomato minced meat and a lot zucchini(Spiced like spaghetti sauce). And a lot more.

What music do I listen to.

I also like: Bon Jovi, Aerosmith, Simon and Garfunkel, classics of Skrillex, Silverchair, classics of System of a down, Green day, Michael Jackson, Singing of Freddy Mercury, Alanis Morissette…and so on.

What are my favourite computergames.

I think there is a lot of great games and  I really don’t know if you can call one single one the best. But this could be my overall favourite game. I mean at least I love this game. Unfortunatly even though it is free and legaly to get in the internet as a download in this version there are no videos which gave the original game so much. So please whatever company now owns the rights make a free version with working videos great would also be the real beginning video ending on the explosion and the C&C sign. And at first start the introduction video with the Nod and Gdi images transmitted into the Tv stations.

But I said I don’t know if you can call one game the best.

There are other great games like Skyrim, Ufo(a new version with all 3d), Gta 4(fifth one should be free, I think we all should pay a general fee and then be able to load every content from the internet). ..by now I have bought Gta 5.

I usually really like Real time strategy games. Classics like Warcraft1/2 (Yeah, really “orks and humans”), actually all rts (Blizzard, Ea, get the pace of the games down to that it is the time of like a real world and not 4 times as fast as the real world, because faster RTS does not mean better RTS, and then make it cute enough. watch my mod Saron Plains). Lately I have been playing some Planetside 2 on server Connery I have played for the Vanu Sovereignity team.

does not mean something special. It is more of a joke because to german ears it sounds very poweful and action-like because of the vader while for real it means “the one getting away”. This is my computer-name since I was sixteen or so. It can also mean “the one making an enemy plan fail” I also liked this. Back then I searched for a cool computer-name by randomly pointing into a dictionary and liked it so I took it.

I needed this computername at first for the game “Worms part 1″ on the Commodore Amiga computer. We played this with friends. It is an old version of a 2d-ballistic-tank-game where instead of tanks you have worms with guns. There is still modern versions of this game out there. But the original was especially fun.

Once I listened to the  “Command & Conquer : Tiberian Dawn Full OST” on youtube. Songs from a computergame of about 1994. Great. I also like to listen to Skrillex “bun them”, “My name is skrillex, skrillex remix”, “E.t:”. I listen to this songs and dance some dubstep robostuff to it, this counts as sports.

If you think: Where can I get free images for my homepage? You should got to this great site:  Free images.

Most images on Wikipedia you can also use for free if you write the name of the author under the image like: Image by.. you have to click on the image and read on the page it leads you to. You can use it if it says “creative commons(cc) and attribution”. while attribution means name the author and “creative commons” means than its free to use. The author name is always written somewhere on this page.

evader is a participant in the Amazon Services LLC Associates Program, an affiliate advertising program designed to provide a means for sites to earn advertising fees by advertising and linking to amazon.com.

The following text is just neccessary for extreme strict regulations in germany concerning internet pages. It just says stuff like that your ip can be seen when you surf an internetsite. And that facebook like-buttons on this page will allow facebook to collect your data. Nothing special but when you are german you are bound by law to tell people that.